If you recall, I attended the annual ACA convention this summer in Cincinnati, Ohio and made several posts about the convention. One of the speakers was a cichlidophile who I’ve followed for some time, and his talk was awesome, as usual.

​Vin Kutty is regarded as an authority on the genus Crenicichla, whose species are commonly called Pike cichlids. Vin has been focused on keeping and breeding pikes for more than two decades. He currently maintains half dozen 180 gallon tanks with pike cichlids. He has collected Crenicichla species in Brazil, Peru, Bolivia, Colombia, Suriname, French Guyana, Uruguay, and Argentina.

I caught up with Vin after his talk at the convention, I introduced myself, and invited him to be interviewed for the blog. He happily agreed.

The Cichlid Stage: You are often referred to as “the pike cichlid expert,” at least within the cichlid hobby. How do you think that got started?

Possibly from the pike cichlid website I set up back in 1997. For about a decade, it was the only site dedicated to the genus Crenicichla. I’m also the admin of the Pike Cichlid group on Facebook. I’ve also focused on pike cichlids in my fish room for almost 25 years.

TCS: You used to write rather prolifically about pikes, with numerous articles still available online. However, most of these articles are now quite old. Where’d you go?

Got busy with raising a family and running a business. I just don’t have the time to write much anymore. There is also less of an info-void when it comes to these fishes. Twenty years ago, there was absolutely nothing in the English language about these fish. So anything I wrote (right or wrong) was happily consumed. That raised the level of knowledge and information among hobbyists. I didn’t know it at the time, but what I thought I knew 20 years ago about distribution and taxonomy, was often wrong. I know enough now to know that I don’t know a whole lot. Frankly, I still feel like I know very little about the subject. That gives me pause when I begin to think about writing an article.

TCS: Specialized cichlid knowledge like yours is difficult to find. What would you consider the top information resources for hobbyists interested in keeping and/or breeding these beautifully unique fish?

Nowadays, it is social media. There is a solid archive of Q&A in the Facebook Pike Cichlid group. We have well over 1000 members, and just about everyone who knows anything about these fish are there. Questions are easily answered.

TCS: The Crenicichla genus comprises more than 100 species of cichlids (described and undescribed) native to South America that range in size from a few inches to a few feet, all of which have been categorized into five distinct groups. They are commonly referred to as pike cichlids due to their physical shape, which is very similar to large game fish like the Northern Pike (Esox lucius) in the US. Would you name the five groups and tell the readers what separates them descriptively and geographically?

From small to large:
​
Regani group: These are generally dwarf pikes that live in leaf litter along with tetras and apistos. You can keep them easily and many are regularly bred in tanks that are 2 or 3 feet long.

Reticulata group: These are larger, less-colorful, and a lot more aggressive than the dwarf pikes, and not surprisingly, do not get much love from the average hobbyists. But for the specialist, these fish are fascinating.

Saxatilis group: Also known as spangled pikes. They are common, even sold at Walmart sometimes. Very hard, aggressive, but can be kept and bred in a regular 55-gal tank.

Lacustris group: These are large fish that inhabit coastal regions of Brazil, Uruguay, and some parts of Argentina. Some of them are cold-hardy.
​
Lugubris group: These are the giants, often getting to 18” in length. Very colorful and rewarding to keep if you can give it a large (6 to 10 foot) tank. 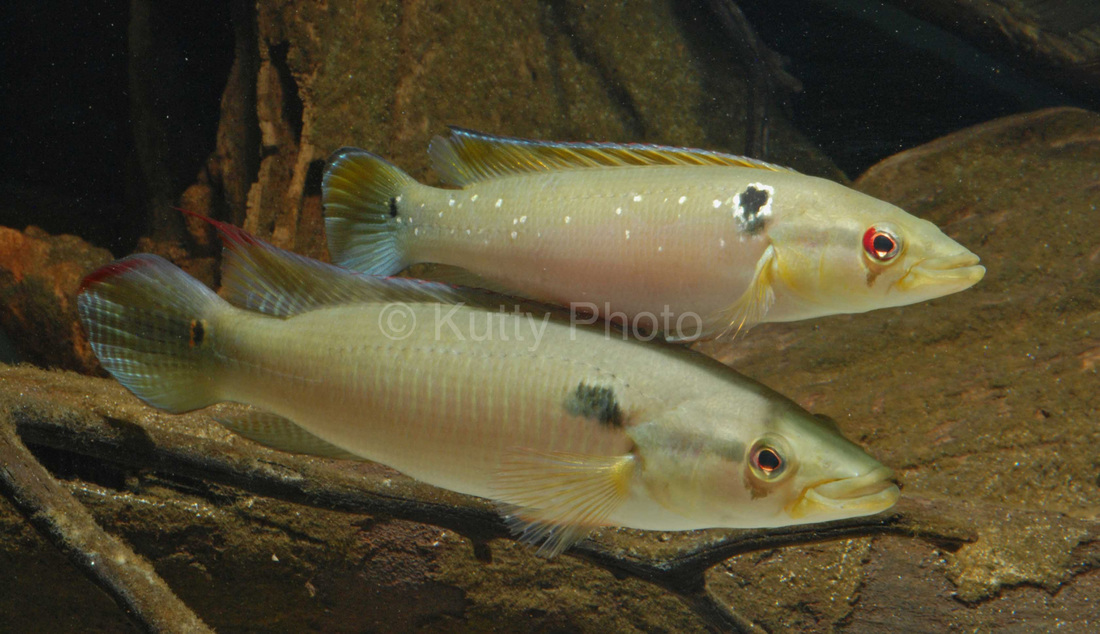 TCS: For the experienced cichlidophile who has never kept pikes, which species would you recommend starting with and describe the ideal tank set-up (tank size, water conditions, etc.) for each?
​
Dwarf pikes and Spangled pikes are your best bet for an intro to pikes. Lots of interesting behavior, but they can be bred while still relatively small. There may still be aggression issues, but you can manage it due to the size of the fish. A 55-75 gal tank is a good place to start. Lots of driftwood, dither fish, other cichlids, and hiding places. Sooner or later, if you get half dozen fish, you will end up with a pair and the other 4 will need to escape. You may need to intervene after the pair has formed. After that, all it takes is clean water and a good varied diet of frozen foods and pellets. Water hardness and pH is completely irrelevant for spangled pikes. Dwarf pikes appreciate soft, acidic water for spawning. Treat dwarf pikes like large apistos. These are easy to keep.

TCS: For those who prefer to keep (or are tank size limited to keeping) smaller pikes, talk about a few of the dwarf species that are generally available in the hobby.

The most common dwarf pike is Crenicichla regani. It also happens to be the easiest to spawn. You may find C. compressiceps sometimes, but they need big tanks, are aggressive, and need very clean water. Other soft water species from Rio Negro and Orinoco include C. notophthalmus and C. wallacii, but these are rarer and need really soft, acidic water (pH of about 5) to spawn. There are a couple of undescribed species as well, but they are very rare.

TCS: Pikes have garnered a reputation for generally having a nasty disposition. Why do you believe this is true?

They are territorial fish and have the urge to clear their immediate vicinity of competition. So you will have aggression even before a pair is formed. But overall, they are no more aggressive than any of the Central American cichlids. If you can keep Centrals, you will be fine with pikes. How aggressive a pike is depends on the tank size, age, and readiness to pair up. So if you hit all three of these at the same time, you will have some aggression issues. Having spare tanks to move injured or submissive fish is important in pike keeping. If the mated pair spares the lives of the unpaired ones, you can always move them out, sell or give the others away. I would not keep unpaired pikes in the same tank as a compatible pair – the unpaired pike will certainly be harassed and killed. Spare it a miserable death and just net it out. 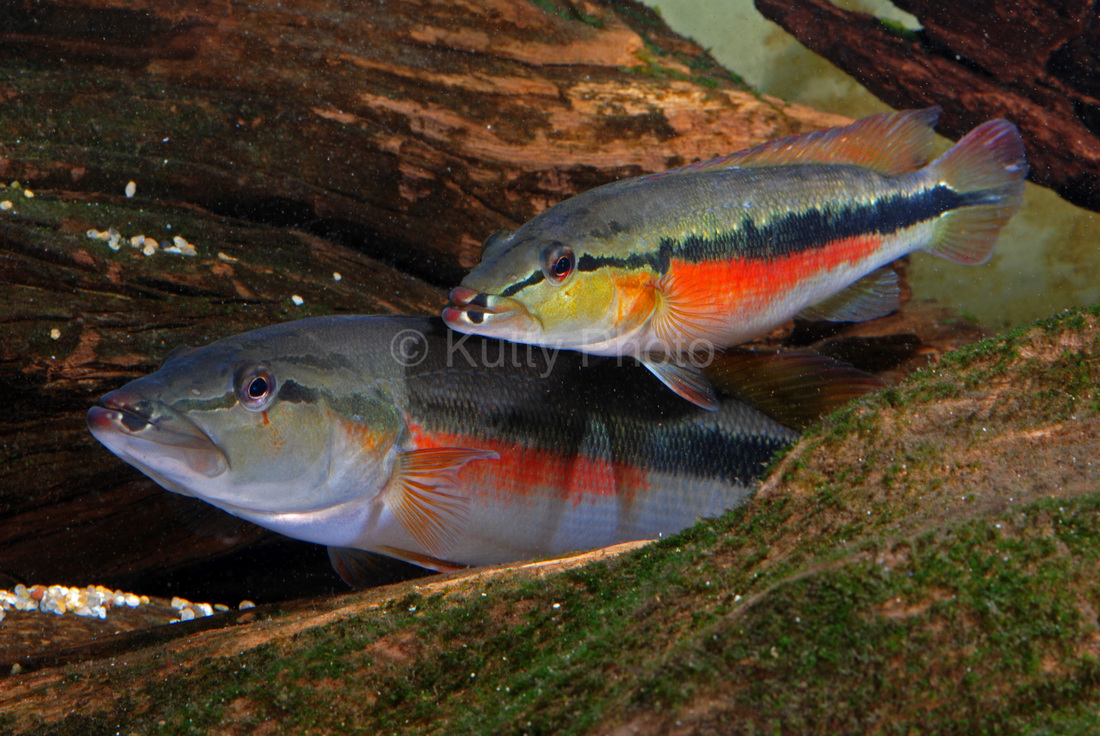 TCS: You’ve kept and bred pike cichlids for many, many years. Please share with the readers some of your top do’s and don’ts with respect to keeping pikes in aquaria.

The most important thing is having a large tank. Then, focus on lots of big water changes, cleaning, and a variety of frozen foods. Pellets should not be the staple, but can be used if you’re too busy to deal with frozen stuff. I don’t recommend live feeder fish – too risky. It is also important to have lots of driftwood and hiding places. Pikes are cave spawners, so give them what they need to spawn. PVC tubes are ugly, but work nicely. I would advise against keeping them if you do not have a large tank. In small tanks, they are miserable and you will not see any interesting behavior. Do not keep similar species of pikes together – this formula is rarely successful. You may be able to combine members of different species groups (see above), but even that is generally not a good idea. You can keep pikes with other non-pike cichlids, but generally, just one pike species per tank.