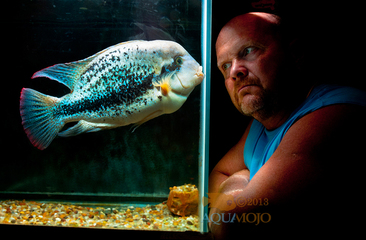 Mo with one of his favorite cichlids, a beautiful Paratheraps zonatus he called Big Blue.

Let me introduce Morrell Devlin, cichlid keeper extraordinaire and expert aquatic photographer. Better known as Mo or Aquamojo by fellow hobbyists, he has kept hundreds of species. His main area of interest is New World cichlids and for the past 20 years he’s focused on the diverse species from Central America. When it comes to aquatic photography, he has to be one of the finest in the hobby. In fact, you’ve probably seen his photos many times and didn’t know it. He’s a long term member of the American Cichlid Association (ACA) as well as its governing body, so he attends the ACA annual convention regularly. He’s also the proprietor of AquaMojo.com, a website for those interested in “tank buster” cichlids, as he calls them. I encourage you to visit his website and see some of the finest cichlid photos you will ever see. Check out his Facebook page too!

I met Mo sometime back in the early 2000s at an ACA convention and I have to say he is one of the nicest guys that I’ve ever met. We always enjoy good-natured banter about his love for large cichlids and my love for the dwarf variety.

The Cichlid Stage: How did you get started in the hobby?

My father got me interested at age 13.  He always had fish tanks.  I can remember visiting local stores shopping for fish.  All of my father’s tanks were community fish, but he leaned toward more of the oddball types.  The first one that I can specifically remember was a Congo Puffer that he bought. He kept it in a separate tank and I thought that was pretty cool.  Eventually he gave me my own tank. The first fish I ever “owned” was an albino tiger Oscar…a fish that ate other fish.  I was hooked.

TCS: You once had a huge pond…INSIDE! If you still have it, tell us about your cichlid pond.

I got rid of the pond several years ago.  I’m pretty sure I was the first, definitely one of the first, to do something that crazy.  It was in my basement.  Eight foot square, four foot deep.  1600 gallons.  I had to modify a Jacuzzi heater to accommodate the pond…used a pool filter to filter it.  It had a skimmer and an intake system that was packed with sponge filters.  Ultimately, I got rid of it because it was too time consuming.  I used to do a 30% water change on it every two weeks.  That plus not being covered it had a big effect on the humidity in my home.  The final straw was a hose busting and emptying half of the water on the floor.  This resulted in a mold problem, a five thousand dollar fix and a very PO’d wife.  SO the pond went.

TCS: What all did you stock in the pond?

I originally built it to house one fish…a red tail catfish I called “Ming”.  He was growing out in a 180 gallon tank and was about 20” long when I moved him downstairs.  I slowly started adding fish to the pond, fully expecting that most would be meals for Ming.  They were not. In fact the exact opposite happened.  I was able to keep a wide variety of fish without any problems.  At one point I had a 24” Pacu, Ming, Citrinellum and Gourami in the same tank.  Over the years it housed a variety of cichlids including Managuense, Istlantum, Citrinellum, Macrocanthus, Salvini, Convicts, Fredrichsthali, Dovii, and Nicarauguense…to name a few.  Non-cichlids included various metynsis, gourami, silver barbs, and even African Butterfly fish.  The latter a big mistake.  All of them eventually assumed there was “bigger water” on the other side of the pond…and ended up being found on the floor looking like dried up lapel pins. 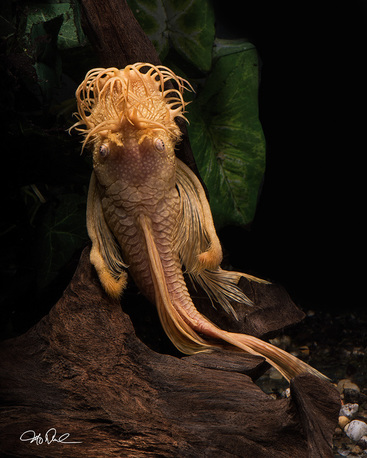 TCS: Tell us about your current tank set-up at home.

I have 23 tanks up and running right now…about 2800 gallons of water.  Most of the tanks have cichlids.  I just recently devoted one tank to some community fish (Rainbows, Danios, some Black Phantom tetras). My good friend and aquatic legend, Charlie Grimes, has promised to send me some Killifish and some White Cloud Minnows to try.  The rest of the tanks have a mixture of cichlids.  Most of them are dedicated to one or two single species.  I have one large tank with a mixture of the fish. The list of the tankbusters includes Managuense, Citrinellum, P. Coatzacoalcos, Fredrichsthali, Regani, Cyanaguttatus and Hogaboomorum.  I recently started “downsizing” to smaller species: Heckeli, Salvini, Myrnae, SIquia, Panamensis, Nanoluteus, Cutteri and Sajica. I also have a big variety of Metynsis and Mylosoma that I use as dithers…some quite large…and an assortment of pleco including an 18” Adonis pleco, an awesome long-finned albino bristlenose pleco, green phantom and several others.  One of the fish, a Raphael Catfish, is an almost unbelievable 22 years old! 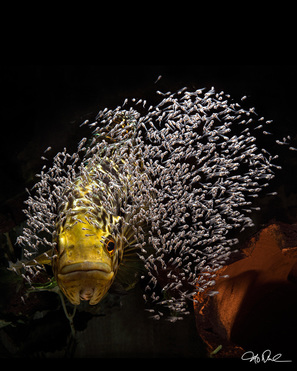 TCS: What’s your favorite cichlid species and why?

Hands down, Parachromis managuense.  I’ve always had one or more in my tanks.  Right now I have five of them.  Many years ago I had a managuense that I called “Jumbo”.  Without exaggeration, the fish was known by name internationally…no doubt because of all the photos I took of him. Jumbo was the most interactive and entertaining fish I ever owned.  In fact, if you Google “cichlid and jumbo”…his is the first image that comes up.

TCS: For those cichlid keepers who’ve never attended an ACA convention, what would you tell them to convince them they should, at least once?

I’ve been asked this question several times in the past. Hands down it’s to meet with other hobbyists. It’s one of the few places or times that you can get experts from all over the country and sometimes the globe in one place.  Ad Konigs, Juan Miguel Artigas Azas, Rusty Wessel, Anton Lamboj, Pam Chin, Paul Loiselle and more…not to mention people that you may converse with online over the years.  Lots of cichlid knowledge, lots of cichlids to see and buy, auctions, vendors…it’s a blast.  And if you miss one that’s close by…you made a mistake.

TCS: You are an expert aquatic photographer. How did you get started photographing fish?

Once again…my father. My dad was a collector of cactus.  He loved photographing them.  I got interested in photography watching him in action…picked up the camera and never put it down. It was just a natural progression to turn the lens toward the fish tank.  A lot of my skills in aquatic photography came from my experience with photography taking lots of other photos, including a military career where I used the camera to photograph autopsies.  If you want to hone your skills at getting the photo right the first time, that’s the place to start.  My boss used to say, you have to get it right the first time.  You can’t dig them back up for a second sitting.

TCS: What advice would you give someone wanting to take up aquatic photography?

Editor of ACA News and hobbyist