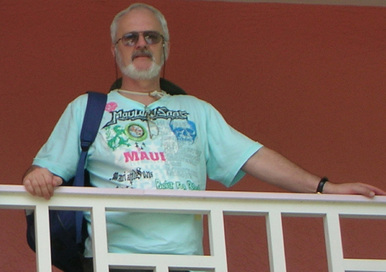 Daryl Hutchins during some of his leisure time. Photo Val Hutchins.

I’ve met cichlid keepers from all walks of life and from all across the country. However, until recently, I had never met a cichlidophile from “down under”. As a native and current resident of Melbourne, Australia, Daryl Hutchins has kept many varieties of fish since he was a child. If the name sounds a bit familiar, you probably know him as Editor of the Buntbarsche Bulletin, the official journal of the American Cichlid Association.
​
Daryl’s dedication to the hobby can’t be understated when he simultaneously serves cichlid groups in two countries that are over 9000 miles apart (that’s over 15,000 kilometers for you non-US readers) and has flown to the US for the annual ACA convention twice. I reached out to Daryl a few months ago about being interviewed for the blog. He graciously agreed, so here we go.

The Cichlid Stage: As a native and resident of Australia, tell the readers how you got involved in the American Cichlid Association, the national cichlid organization of the United States?

In 1972 a local cichlid specialist group, the Victorian Cichlid Society, had just formed and of course I joined that. Shortly thereafter, two fellow members (Graham Rowe and Peter Robinson) and myself came to know Guy Jordan, with whom we “tape-sponded” regularly. At Guy’s urging, we joined the American Cichlid Association. “Tape nights” became a very enjoyable part of our hobby experience. My membership was allowed to lapse after Guy’s passing, mostly because according to my calculations, the ACA was losing money on the deal and I had access to the ‘Buntbarsche Bulletin’ through other local members anyway. 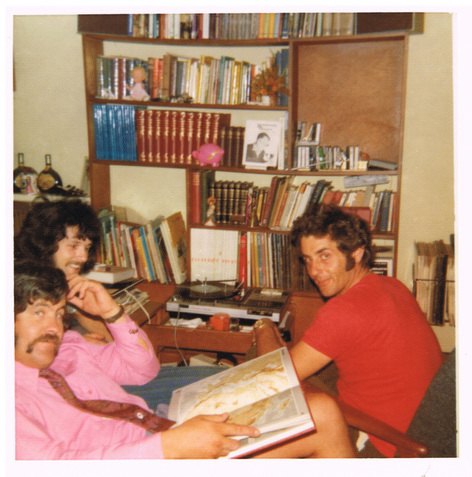 Pictured above are Graham Rowe (front-left), Peter Robinson (right) and Daryl (rear-left) caught in the act of making a tape for Guy Jordan back in the 1970s. Photo Helen Rowe.

TCS: For those who have never heard of Guy Jordan, the founder of the American Cichlid Association, tell the readers a little about him and describe what you mean by “tape-sponding.”​

It certainly was a privilege; there have been very few people in the world who I could just listen to for hours and Guy Jordan was certainly one of them. Besides knowing just about anything you wanted to know about cichlids, he had been around a little and had some good tips on clubs and life in general. He was one of the founders of the ACA, but was quick to emphasize that it was a group effort.In his latter years Guy’s eyesight was failing to the extent that he was legally blind and so he communicated with people all over the world by exchanging cassette tapes. Tapes were exchanged every three to four weeks as well as copies of our respective local journals, ‘Tropical Breeze’ and ‘The Cichlid Monthly’. [Still have some of those tapes … I must see if there is anything still on them one day.]

TCS: You mentioned the Victorian Cichlid Society, an organization you’ve been heavily involved in. Tell us about your involvement and some of the group’s activities.

As mentioned above, I have been a member of the VCS since the Dawn of Time and have served in a number of committee positions: President, Vice-President, Treasurer, Committee-at-Large and various sub-committees. But it was as Editor that I served the most terms on committee. Officially elected to the position 22 times, but there were a number of years that I provided typesetting, imaging, editing and/or publishing support while not officially serving in the position.

The VCS does all the normal local club things, meeting monthly (except January and June-Aug [winter]) to enjoy presentations, competitions, raffles, shows, auctions, etc. We especially like to join with other clubs around the country to import overseas speakers.

TCS: As a longtime reader of the Buntbarsche Bulletin (BB) and the Managing Editor since 2015, in your opinion what have been some of the most significant changes to the journal since the first edition 50 years ago?

There have been no “significant changes” at all to BB since the first edition. Rather, it has just continued to evolve with the times. Always improving and implementing the latest new technologies. From humble beginnings as a few sheets published in mono and text only, through to the 40-page-plus, full-colour, offset-printed magazines of recent years.

The latest incarnation as an electronic publication simply continues that evolution. Thanks to some enthusiastic members and a wonderful friend of the ACA, Zoo Med, the paper edition has not gone away. It is now available through the Back Issues facility on the website (cichlid.org).

TCS: Besides meeting the publishing deadline, what are some of your biggest challenges as Managing Editor of BB?

The biggest challenge for any Editor is acquiring material for publication in the first place. Being on the other side of the planet doesn’t help in that regard as it is hard to hound prospective contributors by e-mail.

TCS: For those who are unfamiliar with BB, explain to the readers what they might find in a typical issue.

It’s hard to imagine anyone being “unfamiliar” with ‘Buntbarsche Bulletin’, but if that is true we should certainly remedy the situation immediately. I have always considered an organization’s journal to be its flagship and a good indicator of its health and where it is heading. BB has performed that role well. It has always contained a mixture of great, readable articles by authors with varying levels of expertise from trained scientists to the keenest aquarists.

TCS: What are some of the biggest differences in the cichlid hobby between the US and Australia?

There is no comparison between the US and Australian cichlid hobbies. The Australian aquarium hobby is severely restricted and is subject to an extremely limited “White List”. The cichlids on the list total 40 species from 24 genera, plus eight genera from which any species is allowable (Apistogramma and Tropheus … the rest contain only a few species). Many on the list are further subject to size and, in some cases, color restrictions.

Fishes that were imported before the restrictions were imposed are “tolerated” in some states, but many have gone extinct in this country already. I think there is a message here for the US hobby.

TCS: As an aquarist yourself, what have been some of your favorite cichlid species to keep and why?

Herotilapia multispinosa immediately springs to mind, mostly because it was the first fish I bought and bred knowing that it was a cichlid. Of course when I first bought them ($25 a pair) it was still possible to sell their progeny and the dealer was happy to take them for a number of years. I estimate that they lowered the running cost of my fish house to next to zero … for a while.

My all-time favorite would have to be Parachromis managuensis, although when I was keeping and breeding them they were a Cichlasoma … like nearly everything else. Manas are very personable fish; not quite scaly dogs, but close. Their appearance speaks for itself.

TCS: How do you envision the cichlid hobby evolving over the next 10 years?

You probably shouldn’t listen to me on that subject as I am just naturally pessimistic when it comes to Government and its capacity for common sense. I’m sure that your governments are much better informed and have no hidden agendas. To be honest, I am very worried about the cichlid hobby here in Australia, where it has been all but killed-off by misinformed government regulators. Suffice to say, the aquarium industry has horrendous importation protocols and an “allowable (white) list” to work with … keep an eye on your local legislators for any mention of such a thing, by whatever name.
​